Nestled in the Aravalli hills, the Hadoti region has its share of wetlands, which makes it the ideal choice of habitat for a number of animal and bird species. As far as the Wildlife in Bundi is concerned, apart from being known as the queen of Hadoti for its natural splendor and cultural heritage, Bundi takes the cake in the biodiversity department as well. Bundi plays host to more than 200 species of birds and more than 30 species of mammals, snakes and reptiles. In this extensive list of the species of birds in Bundi, one can find exotic birds such as cormorants, ibises, pelicans, kingfishers, orioles, parakeets and flycatchers. Among the animal species, one can expect to find leopards, bears, Nilgai and various species of deer. 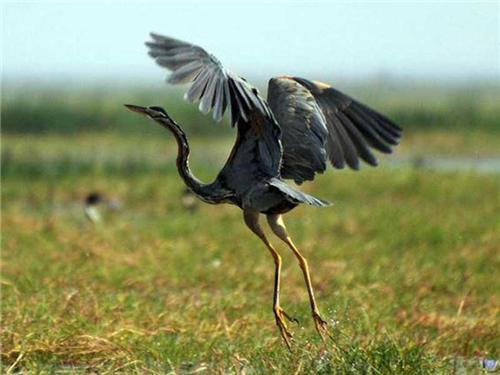 Wildlife Parks and Sanctuaries In and Around Bundi

The Ramgarh Vishdhari Sanctuary is the largest of the wildlife reserves in Bundi as well as the entire Hadoti region of Rajasthan. Spread over 307 sq.kms., it consists of hilly, dry deciduous forest. If you decide to partake in a thrilling Safari here, you can expect to see the elusive Asiatic wild dog or Dhole, the leopard, the large Sambhar or Rusa deer, wild boar, sloth bear, Hyena, jackal, Chinkara deer, Indian wolf and fox.

The Darrah Wildlife sanctuary actually covers three separate wildlife reserves – The Chambal, Darrah and Jaswant Sagar wildlife sanctuaries. The vegetation here is the typical vegetation one may expect in an arid forest, including trees such as Acacia. The Chambal River flows through this sanctuary. It is the third largest sanctuary in the Hadoti region.

Birding, or the hobby of observing and appreciating birds, is the singular pastime for which there is hardly an area popular in the entire country on a scale of Bundi. The climate of the Hadoti region, a unique mix of arid forest and marshy wetlands, is ideal for nesting birds as well as migratory birds that overwinter here.

There are some peculiar species of migratory birds that are iconic to Bundi, some of which are listed below:
Cormorants are arboreal species that known for their glossy plumage and emerald eyes. Of the two species of cormorants in Bundi, the more popular one is the ‘snake bird’, so called because its side body profile resembles a snake’s.

Geese and ducks of multi colored hues frequent lakes such as Jait Sagar and irrigation projects such as Bhimlat and Gararda. These aquatic waddlers look very photogenic when frolicking on the surface, and include exotic species such as the Grey Lag and the Bar Headed Goose. Duck species include the iconic Mallard, The Common Teal, the Ruddy and Common Shelduck, the Widgoen and the Shoveller.

Herons are long legged shore birds with tufts of feathers growing back from the crown of their heads. They elicit awe because of the speed with which they spear fish using their beaks. Specis found in Bundi include the Common Grey, Pond, Purpe and Night Herons. The Egret is a distant cousin.

Ibises have featured in Egyptian hieroglyphics in the past and are venerated in many ancient cultures. Some of them have made Bundi their second home, where they can be seen using their curved beaks to eat frogs and other aquatic creatures.

The Demoiselle crane is many a wildlife photographer’s favorite subject and can be seen flying low through open meadows during breeding season. It is an endangered and as such has garnered a lot of spotlight. It is identified by a singly tuft of feathers cuving down parallel to its neck, starting from behind the eyes.

Pelicans are as flamboyant as a bird can be, and find mention in the ancient Indian fables as an example of extreme concentration while hunting. In Bundi we have species such as the Pink and the Dalmatian or spotted pelicans.

Storks favor Bundi a lot, and Bundi is known for hosting five out of seventeen of the total species of Storks found on the planet. They are a common sight amongst the Acacia trees, nesting among the higher branches.