The geography of the Hadoti region includes a variety of vegetation, terrain and water bodies, all of which contribute to make an excursion around Bundi a memorable trip in itself. The places near Bundi have a charm of their own - a hamlet nestled in some nook or cranny, or a vast expanse of pristine sparkling water or a haven for migratory birds. Most of these places can be covered within a couple of days. Here are some of the places near Bundi in Rajasthan. 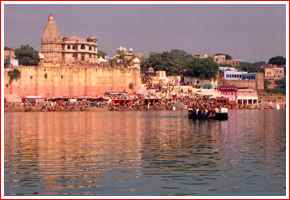 A small town near Bundi, it hosts the world famous Mini Pushkar Fair every year, and is hence a very popular destination with foreigners. Situated at a distance of 45 kilometers from Bundi, the town prospers on the banks of the Chambal river and is especially noted for the temple of Keshav Rai Ji. It is also known for the Makkeshah Baba Dargah. 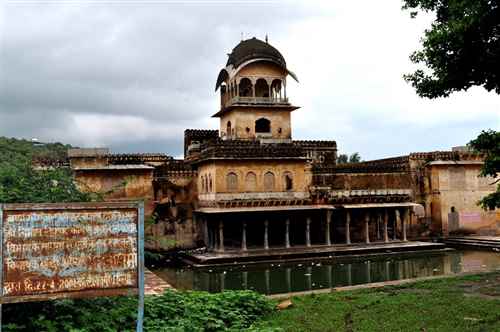 The nearest location on the outskirts of Bundi, the Shikaar Burj was constructed as a retreat by Raja Ummed Singh in the foothills of the Aravallis in 1713, after he gave up the throne for the successor, his son Raja Ajit Singh. This palace is ap ictue of serenity, and looks even more lovely during the rains.

This irrigation project lies just downstream of the famous Bhimlat falls, a famous picnic spot and a place of religious significance. The area is known for attracting thousands of migrant birds that overwinter and breed here.

Bardha dam is another exciting location for birding and observing the behavior of exotic species of birds. This century old dam lies across the Talera River near NH12.

Like Keshav Rai Patan, this is another town in the vicinity of Bundi, and one of the most prominent tourist spots near Bundi. It was the nerve centre for development of art and architecture during the reign of the Chauhan dynasty and has three temple complexes dedicated to Lord Shiva, which bear testimony to their rule.

A sacred shrine for ardent shaivites and one of the many tourist attractions dotting the Aravallis, the Rameshwar cave encloses a temple of Lord Shiva. It is set in the backdrop of a gorgeous waterfall that cascades down into a clear pool, a dip in which is considered spiritually purifying.

The Talwas fort was built under orders from Ajit Singh, son of Raja Ummed Singh. It is present on the banks of the Talwas Lake, which lies adjacent to the Ramgarh Vishdhari Sanctuary. Nearby is the Dhooleshwar Mahadev temple, dedicated to local incarnation of Lord Shiva. You can see flocks of white pelicans thronging the trees near the lake during breeding season.

One of the lesser visited forts owing to its distance from Bundi, it is a delightful prospect for the traveler seeking utter silence. Its four gates and massive walls enclose The Hawa Mahal, Supari Mahal and Janan Mahal, each of which is known for exquisite Bundi style paintings.