Seldom can one see a melting pot of religions and cultures akin to that of Bundi, land of the Baoris or stepwells. The myriad religious places in Bundi include a Sikh Gurudwara, a mosque, and a number of ancient temples that are well known countrywide. This place goes on to show that not only is Rajasthan emblematic of the warriors of yore, it is also a confluence of various religions and spiritual sects, all of which coexist in beautiful harmony. 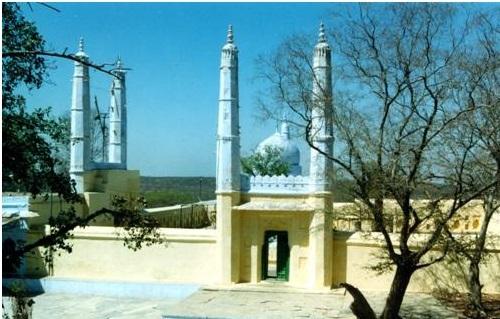 One of the crowning glories of the erstwhile Hada Chauhan Empire ruling the Hadoti region in which Bundi is situated, the man made Baan Ganga stream is a marvel of architecture and the neighboring Kedareshwar temple is one of the most prominent temples in Bundi. The stream flows beside the temple, emptying into the Jaitsagar lake at the end of its course. The name of the dam is derived from folklore, according to which Rao Raja Kolhan himself shot an arrow into the ground, from where this stream is said to have erupted.

This pristine mosque is known for its silhouette against the backdrop of the setting sun. Situated on a hill towards the eastern side of Bundi city, it is the first of its kind in the region and hence holds pride of place among the places to visit in Bundi. A peculiar feature of this Dargah is the presence of five instead of the customary four minarets usually found in such structures. It hosts a colourful fair during the Eid festival.

Gurudwaras are iconic landmarks, places of worship, shrines for preserving artifacts of Sikh culture and a shelter for the needy all rolled into one. The Shri Langar Sahib Ji on the Bundi Kota Bypass road is no different. Do visit this peaceful shrine when you get a chance. 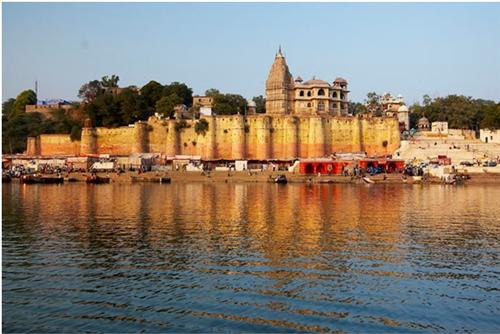 Though being a natural structure instead of a monument, this place yet holds a lot of significance for pilgrims visiting Bundi. Consisting of a waterfall and a catchment area where the water collects to form a scintillating pool, this place is supposedly associated with the mythology of Lord Shiva, though the origins are shrouded in mystery.

Keshav Rai Patan is a well known town situated near Bundi. It is famous for a temple of Keshav Rai Ji, a local avatar of Lord Vishnu. The temple was completed by Maharaja Shatrusal in the early part of the 17th Century. It is said that one of Shatrusal’s ancestors, Raja Ranti Deo, did so much penance that Lord Vishnu appeared to him in the form of Shri Keshav Rai Ji in the 13th hundred years to complete.

This temple was built in the 18th Century and is based on a curvilinear superstructure. It enshrines a Linga in the Garbhagriha (sanctum sanctorum).

This temple was also said to have been built under orders from Maharaja Shatrusal. It houses a black idol of Lord Vishnu with four arms.

According to historic records, when a Mughal emperor laid siege to Ranthmabhor fort, the then king Rao Surjan Singh fled and brought with him two idols of Lord Vishnu. He installed one at Bundi and the other at Baran nearby, where his wife Queen Kunwar Bai Ji asked him to build a temple, which is known as the Kalyan Rai Ji temple. The temple is noteworthy for its two massive Nagaras or drums which are beaten during Aarti, a statue of Garuda, the bearer of Lord Vishnu under the central canopy atop a plinth; an image of Mahavir Ji at the entrance to the sanctum and the black idol of Kalayn Rai Ji seated atop a silver throne.