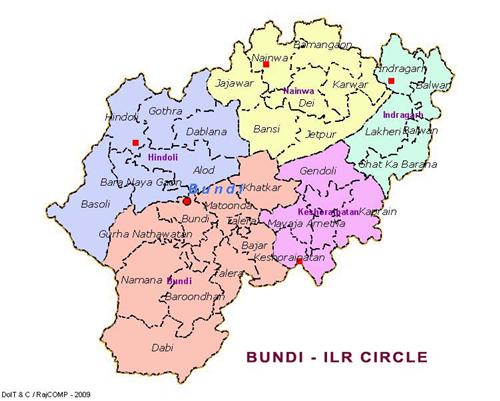 Fortified by the hills of the Aravalli range on three sides, the majestic city of Bundi lies distinctly in the state of Rajasthan. It is situated 35Km from Kota, of which it used to be an integral part, and some 210 Km from the state capital Jaipur. A part of the Hadoti region of Rajasthan, which also includes Baran, Jhalawar, and Kota, it is a jewel in the crown of the state with its mighty forts, palaces and baoris, which are step-well reservoirs. The step-wells ensured that the city never faced a drought due to water fluctuations in this part of India and are also of architectural significance. The Indargarh stepwell is known for its pristine beauty and is a tourist hot spot especially during the rainy season, when its beauty becomes ethereal with crystal clear water falling down.

The geographical coordinates of Bundi are estimated to be 25°26'30" north latitude and 75°38'30" east longitude. The city is located at a considerable elevation of roughly 268 meters above sea level. The city also has a narrow gorge in the vicinity. It is also encircled by a wall which has four gateways to enter the city, asserting its defensive strategies since the olden times.

The area under irrigation is 2273.68 sq. Km. which amounts to approximately 41% of the total geographical area. Main sources of irrigation in the city are canals, wells and tanks, with canals being the most important. The district also has proximity of rivers like Chambal, Mangli, Mej etc.

The climate of Bundi is typically intemperate with substantially warm and dry summers and chilly winters with very low temperatures. The average temperature of the city in summer usually ranges between 35°C to harshly hot 43°C, and in the winters it usually drops down to as low as 5°C. As its neighbouring towns and cities, rainfall is scarce and is not more than about 75 centimeters per annum. But still the best time to enjoy your visit to Bundi is between August and February, especially when the temperatures are not that bitter and there is a bit of rainfall.

In the 2001 Indian census Bundi had a population of 88,312 which increased to 104,457 people in the 2011 census. The sex ratio of Bundi is good with males constituting 53% of the population and females 47%. Bundi has an average literacy rate of 67%, which is much higher compared to India’s national average of 59.5%. The male literacy stands much higher at 75% compared to the female literacy at 57%. The development of tourism in the city has a good affect on the education and the numbers should definitely increase proportionally. 14% of the recorded population is under 6 years of age.