Festivals and Fairs in Bundi 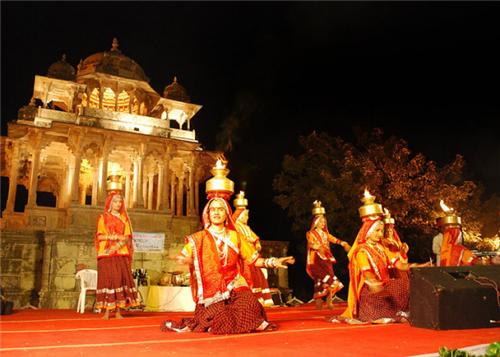 Bundi is known for open heartedly welcoming the inquisitive traveler, offering sights and sounds that delight mind and heart alike. With their cornucopia of scenic locations, spicy cuisine and varied shopping options, the festivals in Bundi, including the world famous Bundi Utsav, are a sight to behold and treasure for eternity. The mini Pushkar fair is the singular event among the fairs in Bundi that manages to catch eyeballs from far and wide, and is a hit with both European and South East Asian visitors. The town of Kesho Rai Patan hosts the fair every year at the same time as the Bundi Utsav.

This festival in Rajasthan is celebrated every year in the month of November, and is a time when Bundi comes out in the open to display its cultural heritage with unmatched pride. Bundi becomes the cynosure of all eyes as inhabitants of the entire Hadoti region gather in droves to show to the world what their craft, cuisine and customs are worth.

The itinerary spans two to three days and includes a number of activities, such as an art and crafts fair, an auspicious Shobha Yatra, rural games, cultural exhibition, an event involving the floating of lamps on the Chambal river, called Deep Daan; fireworks, turban tying competition and classical music and dance programme. Guests from outside the country are garlanded, given colourful turbans to wear, fed a full three course feast and given a place of honour to witness the rapturous grandeur of the many events occurring all around.

Seldom does anyone witness a more spectacular celebration of the monsoon season than the Kajali Teej festival in Bundi, one of the most popular festivals of Rajasthan. It involves the worship of Goddess Uma, female consort of Lord Shiva and considered by ancient Indian scriptures to be the source of the universe’s power. Newlywed brides seek the blessings of Goddess Uma for marital bliss and prosperity.

One can see women gaily dressing up and decorating swings with flowers, as the first drops of the nascent rain fall on the bosom of the scorched earth. A procession carrying a Palanquin parades an idol of Teej Mata through the streets and bylanes of Bundi, with people, decorated elephants, horses and little children trailing in its wake. A mere sight of the Palanquin is considered a good omen, a portent of good times to come. During the festival, a fair showcasing the art and craft of the Hadoti region is also organized nearby, and is a treasure trove for tourists wanting to buy precious souvenirs.

As the Kajali Teej is celebrated for Goddess Uma, so is the Tejaji fair organized to propitiate her husband, the destroyer of worlds, Shankarji, the great Lord Shiva. 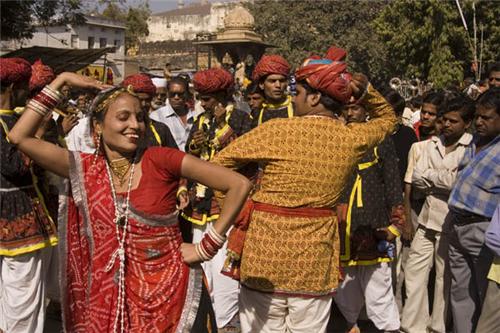 Talera is a picturesque hamlet in Bundi. It houses the Tejaji Thanak temple, a place venerated by many a generation. The fair finds its origins in the 1930s, when it was first organized. The fair is popular for its puppet horse dances, ladies dancing to peppy folk tunes, tableau displays, daredevil stunts and exquisite banquet.

At about the same time as the Bundi Utsav, a mini fair on the same lines as the iconic Pushkar fair is organized at Kesho Rai Patan. The town is decorated gorgeously with colourful lines of multi coloured flags and the townsmen dress up in their best clothes to welcome visitors.

A celebration of the cultural heritage of Bundi ensues, with various special attractions such as children’s rides, camel exhibitions, delectable cuisine stalls and multihued clothing and accessories such as bangles vying for the tourists’ attention.