Bundi is a land that is full of surprises and gives a true picture of the lavish and king-size lifestyle that was led by the residents of the place. It represents the princely culture of the state of Rajasthan in complete style and also exudes the valor that was displayed in the battles fought on this land. It has a number of forts and palaces that bear testimony to the existence of a full-blown princely state with a stable administration since the time of the kings and queens of Rajasthan.

The history books are replete with the legendary tales and brave battles fought in Bundi. It is one of those rare places which not only has monuments of historical value, but is also adorned with the beauty of nature, decorated with lakes, sparkling rivers and majestic waterfalls. Even though the state of Rajasthan is known for its dry land and deserts, Bundi is completely set apart from the rest of the state. It has lush greenery all around it which is the abode for a rich and rare flora and fauna. Its beauty has inspired many artists and writers including great minds like Rudyard Kipling and the noble laureate Rabindranath Tagore. It has been an inspiration to many creative minds and is often referred to as ‘Heaven’ by those whom it inspired. 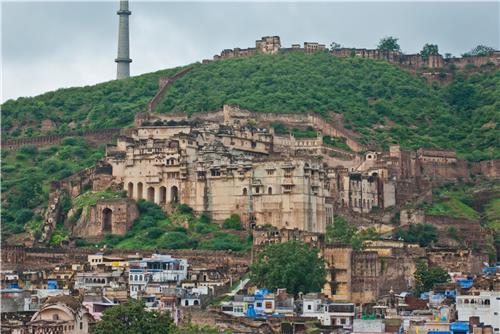 Bundi was considered to be the queen of the Hadoti region of Rajasthan and was named after a chieftain named ‘Bunda’. It is a major tourist attraction of Rajasthan which adds to the need for ensuring a stable and efficient administration in this part of the largest western state of India.
Bundi produces the best and the finest Basmati Rice in India, which also exported to different parts of the world, again suggesting the existence of a proper administrative system. Even the sand stone produced naturally, is a source of income from foreign countries for the princely state of Rajasthan. The City is a major part of the constituency under the Central Cabinet Minister of Rural Development and Panchayat Raj Development, namely Shri C.P. Joshi.

Bundi is a small district in the region of Hadoti, which was state under the control of the Bundi rulers prior to independence along with other popular tourist spots including Kota, Jhalawar and Baran. Among these, Bundi and Kota are the most popular and have established their own identity. Bundi has a population of only 10 lakhs but has a strong infrastructure due to the constant in flow of revenue from regular tourists. The district has its own Municipal Corporation which was upgraded from a municipal council in the year 2012. It is responsible for different cleanliness and maintenance work necessary in the city and is required to be extremely active due to the frequent tourist visits to the town.

The district of Bundi is one among the 25 Lok Sabha Constituencies within the state of Rajasthan and is divided in to 5 sub-divisions or Tehsils, which are Bundi, Hindoli, Indragarh, Keshoraipatan and Nainwa. The region has 3 legislative assemblies at Hindoli, Keshoraipatan and of course Bundi, with one representation at the Parliamentary level and the Tehsils have 5 Panchayat Samitis under it which are further divided into 181 Gram Panchayats. The names of the government and administrative representatives of Bundi at different levels are mentioned below. 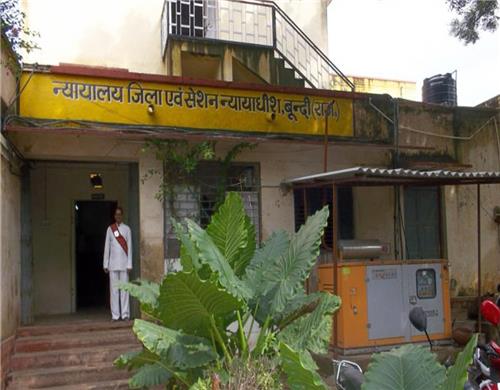 A system of judiciary and courts was existent in the district of Bundi since the time of the Hada Rajputs, who had settled and dominated the Hadoti region, in which Bundi is included. The region received its name from its rulers who had laid siege in the place during the 13th century and remained there for many centuries to come. The Hada Rajputs, had included the regions of Jhalawar, Kota and Baran, besides Bundi in their kingdom of Hadoti. Following the separation of Kota and Jhalawar from under the region of Hadoti during the 16th and 19th century respectively, Bundi remained an independent state until the end of the British Raj in 1947.

The judiciary system and administration of Bundi evolved based on the changes that took place with time and was divided into different phases, as described below:

After 1927
The first Nizam Court in the Bundi region was established by H.H. Maharao Ishwari Singh, with the appointment of law graduate lawyers and chief justices for the first time in the history of the place. He brought about major legal reforms with this sort of legal administrative appointments.

After 1932
Following 1932, courts of First, Second and Third Division Magistrate were established along with the declaration of the jurisdiction of each court as per the Bundi Section 32 of the Criminal procedure Code.

In 1936
The first High Court was established in Bundi and 3 qualified Judges were appointed. Along with these guidelines and regulations associated with the qualification of the judges, appointment process, constitution and jurisdiction of the judges were also clearly codified during March, 1936.

In 1942
Attention was paid to the general rights of the civilians residing within Bundi, as a Munsif Court was established in the year 1942 along with the creation of a post of Public Prosecutor who can represent and fight the plea of civilians in the court of Justice.

The district of Bundi has only one prison which is the Deputy Superintendent District Jail of Bundi. It has been categorized under Class B of jails supervised by the Rajasthan Prison Department which heads all the prisons across all its districts. All kinds of criminals who have been penalized, within the jurisdiction of the district of Bundi are kept in this jail.

Bundi is a very small region within the large state of Rajasthan, but it has a much stronger and more stable administrative structure in comparison to many other larger districts within the state. It lives up to its reputation of being ‘Heaven’ for the locals as well as tourists as the crime rate is considerably low in this part of Rajasthan, while Tourism is the most flourishing industry here, besides textiles and agriculture.